A few years ago, Charlene Lee from Forrester said social networks will be like air. We are now in 2012 and social media had never been this important. I regularly talk to people referring to social media as the web, the whole web. Indeed, the web as became social, and it is hard to find non-social websites. This being said, how can you explain social, when anything is social? It’s simple: you draw a chart with the most emblematic social platforms.

As I have been doing it for the last four years (2008, 2009 and 2011), let me introduce you to my latest social media landscape to help you understand the big picture of who is doing what. 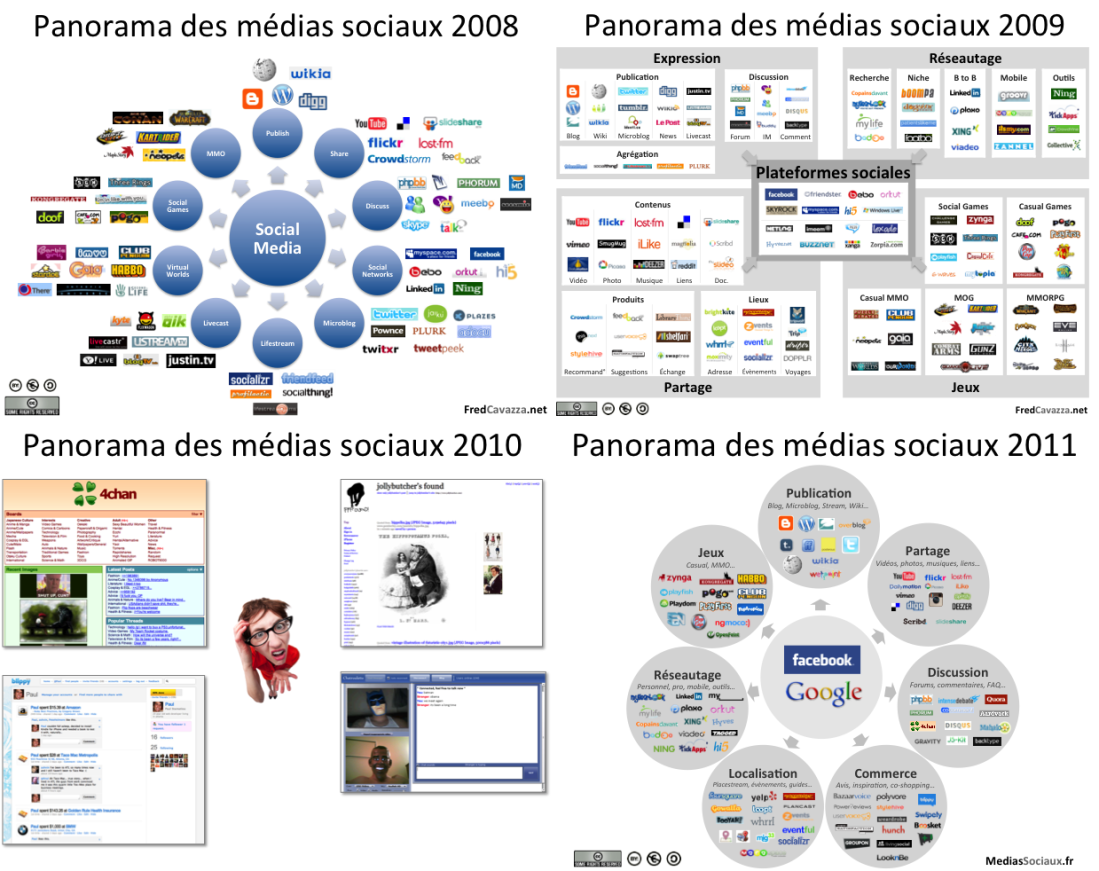 Following a blurry 2010 in which I was unable to draw a consistent chart, the latest version was divided into seven major use and a central position for Facebook and Google. In the 2012 version of my landscape, the split is quite similar, but with new players, a generalization of conversations and the addition of device types.

In this new version, You can find a set of online services allowing conversations and social interactions, on computers, but also on mobile and alternate devices (smartphones, tablets, connected TVs, smartframes…). Although this graph is divided into pies and layers to make it easier to read, social media is a very dense ecosystem where different players lives in symbioses: if they tend to overlap sometimes, they easily lives together, and we are not in a winner-takes-all market configuration (I assume you guess which service I am referring to).

Thus, three major players can be found in the central circle, because they are providing users with a very large set of functionalities (Facebook, Twitter and Google+). If it is possible for a user to publish / share/ play / network / buy / localize on only one of these platforms, they are widely used as containers or relays for what internet users are doing on other platforms. Regarding competition between these three, I don’t believe one can eat the two others, since each one have a distinct orientation: Twitter for content discovery, Google+ to manage your online identity and Facebook to interact with your friends.

As for the usages, I have spread the various services over families:

The main goal of this chart is to make it easier for you to comprehend social media in all its complexity, not to set an exhaustive list of available services. Thus, some major generic platforms or players are not listed here, like bulletin boards, instant messaging services (Skype) or youth virtual worlds (did you know there where more than 250 M accounts created on Habbo?). Furthermore, this graph only reflects western countries social platforms, it does not take in account eastern markets like Russia or asian markets like China or Japan, but a simple google search can bring you countless equivalent graphs for asia.

How to take advantage of social media’s diversity?

Now that we have an overview of social media, it is time to stress THE question: which platform should your brand choose? I think I am not wrong saying there is only one good answer to this question: The important is not to choose the right platform, it is to build a consistent social architecture. Installing your brand on social media is not about choosing one or several social platforms and opening profiles, it is about defining objectives and allocating resources. The platform choice is only the tactical declination of your strategy. Knowing the social media ecosystem is not stabilized, and I doubt it will ever be, choosing one or several platforms is not a long term strategy, it is a short term tactic. The only truly viable social platforms on the long run are the ones you host and manage.

This being said, at one point, you will have to choose one or several platforms! There is no perfect choice since each brand has a different context, but I can provide you with some generic advices:

The chart published in this article gives you an overview of the social media landscape. Its main purpose is to illustrate the diversity of usages and the complexity of this ecosystem. Since the Facebook / iPhone revolution has already happened, 2012 will be the year to strengthen your existing presence or mobile app, but also the year to experiment, because their are numerous opportunities at your disposal.

Let’s make things perfectly clear: When I am suggesting to strengthen and experiment, I am advising you to do it internally, not to outsource it. Because if you let a contractor do it for you, you won’t learn anything and will not be able to gain experience. I strongly believe a small-scale internal social presence is much more profitable than a large-scale outsourced one. Social media ROI is about experience and insights, it is not about fans number.